CAUSES OF ENGINE BEARING FAILURE
The aim of this manual is to enable the reader to diagnose the causes of engine bearing failure through visual inspection of the bearings. Depending upon the type of failure detected, recommendations are then given as to how to remedy the specific cause of damage. One has to keep in mind here that, in addition to ascertaining the appearance of damaged bearings, accurate diagnosis will necessarily call for further information both on the other components involved and on the precise operating conditions. A summary of the most common causes of bearing failure is provided below, although some failures will inevitably result from a combination of more than one cause.

1 -- DIRT
DIRT IN THE LUBRICATION SYSTEM
DIRT ON BEARING BACK


1 -- DIRT
DIRT IN THE LUBRICATION SYSTEM
The presence of dirt particles entrained in the lubrication system is one of the most frequent causes of bearing damage. The root of the problem is usually that the engine is not sufficiently clean. In line with the nature and size of the foreign particles, the bearing will exhibit a correspondingly lesser or greater degree of circumferential scratching and, usually, any debris that may have become
embedded in the lining.
Recommendation: when repairing the engine, ensure that the entire lubrication system is carefully cleaned. 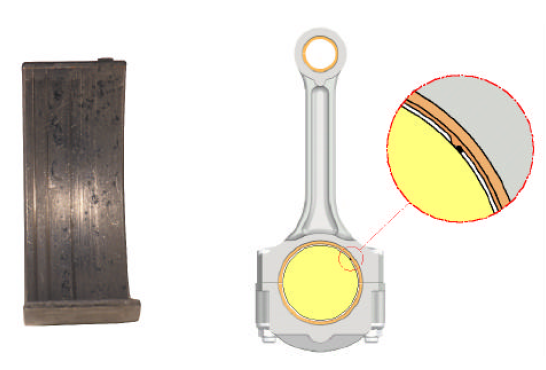 -- DIRT
DIRT ON BEARING BACK
The presence of a foreign particle trapped between the bearing back and its housing will lead to a raised area, with the ensuing risk of contact between this protruding high-spot and the journal. Signs of this will be seen in the area opposite the particle, along the inner surface of the bearing, where there will be evidence of marked localized wear.
Recommendation: ensure that all housings in which bearings are to be seated, are carefully cleaned prior to assembly. 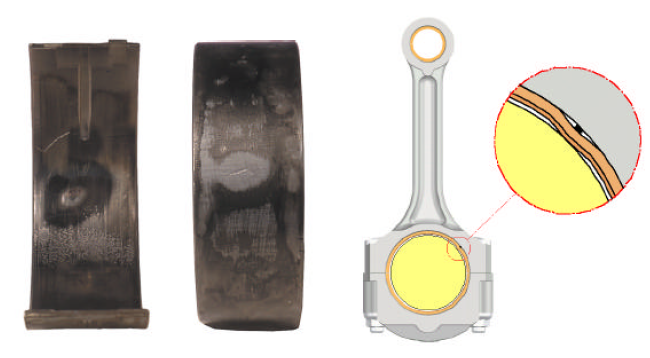 2 -- INSUFFICIENT LUBRICATION
MALFUNCTION IN THE LUBRICATION SYSTEM
A total absence of lubrication of the journal-bearing system leads to bearing seizure and, normally, to total destruction of the part. However an altogether more frequent phenomenon is fatigue due to oil starvation, whereby the amount of oil reaching the journal-bearing system is insufficient to maintain the oil film, leading to metal-to-metal contact between the two parts. Prolonged operation under such
conditions will also result in total destruction of the whole.
Recommendation: the lubrication system must be thoroughly checked in order to pinpoint the cause of failure, which may be a blocked oil passage, an improperly installed bearing, an oil pump malfunction, etc. 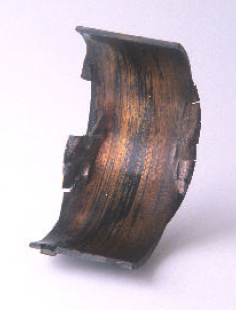 2 -- INSUFFICIENT LUBRICATION
OIL SEAL FAILURE
In the example shown in the photograph, the failure of the crankshaft seal led to oil escaping at this point The track of the pair of bearing shells nearest the seal exhibits symptoms of seizure, due to the oil film rupturing as a result of loss of oil pressure. The circumferential oil groove acted as a barrier to the defect, so that the other track of the bearing shells, as well as the two remaining pairs in the set, only exhibit shiny areas, a sign of oil starvation.
Recommendation: check for possible loss of oil at the seals and replace these wherever necessary. 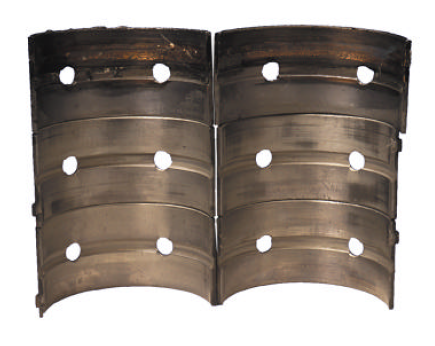 3 -- MISASSEMBLY
BEARING REVERSED
Where a bearing having no oil hole is mistakenly fitted in a position in which it ought to have one, e.g., in a case where the upper and lower seats of a pair of main bearing shells are inadvertently switched, this effectively prevents that particular main journal receiving lubrication. As a consequence, no lubrication can reach the crankpin via such oil holes, eventually leading to seizure of the bearing in question. From the bearing back, it will be evident that the oil passage hole has
been blocked off.
Recommendation: ensure that the utmost precaution is taken during the installation of new bearings and that the correct positioning of each is doublechecked. 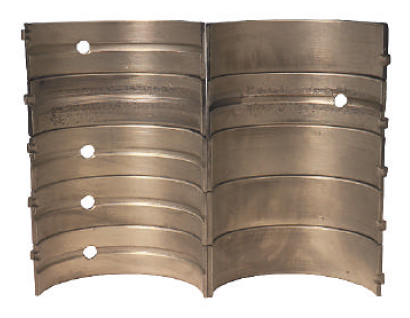 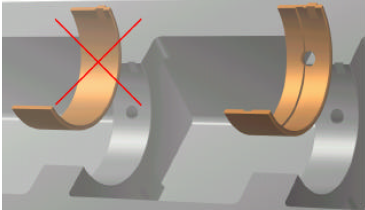 3 -- MISASSEMBLY
OTHER ASSEMBLY ERRORS
When engines are being repaired, the following assembly errors tend to occur fairly often. There will be areas where lubrication may be insufficient, with evidence of excessive localized wear.
Recommendation: ensure that each and every engine component is correctly installed. 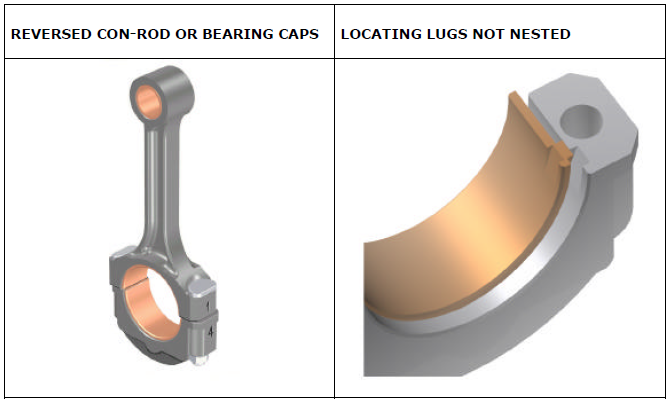 4 -- IMPROPER MACHINING OF COMPONENTS.
IMPROPERLY GROUND HOUSING (FACETED OR POLYGONAL)
Where a housing bore becomes flawed due to engine vibration or some other cause that gives rise to marked out-of-roundness, the bearing will tend to conform to the defective shape of its housing. It will display alternating bands of heavy and normal wear. This defect can lead to metal fatigue.
Recommendation: check for correct grinding of shaft and housing.

4 -- IMPROPER MACHINING OF COMPONENTS.
FILLET RIDE
If the radius of the fillet is increased during the course of a repair to the crankpin, the edge of the bearing may make metal-to-metal contact with the fillet, and will also hinder oil flow. In the photograph, the bearing exhibits signs of incipient damage, with its edge rounded from rubbing against the fillet.
Recommendation: use a grindstone in perfect condition to achieve correct crankshaft geometry.

4 -- IMPROPER MACHINING OF COMPONENTS.
OUT-OF-SHAPE JOURNAL: HOUR-GLASS SHAPED, BARREL SHAPED OR
TAPERED
If the grindstone suffers from excessive wear, the crankshaft will conform to its errors of shape. This means that the clearances and, by extension, the load distribution will not be the same throughout the bearing surface, thereby accelerating bearing wear in the most highly loaded regions due to uneven and inadequate lubrication. Journals can be found with areas that are partially hourglass shaped, barrel shaped or tapered. Visible in the figure is a damaged bearing that has been mounted on a partially tapered journal.
Recommendation: use a grindstone in perfect condition to achieve correct crankshaft geometry. 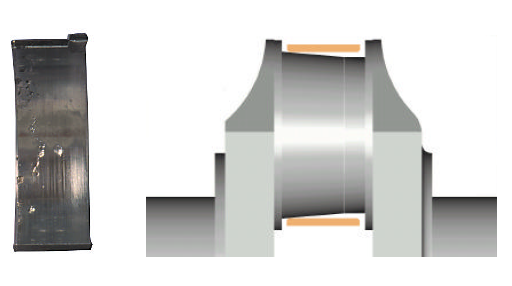 4 -- IMPROPER MACHINING OF COMPONENTS.
MISALIGNMENT OF SHAFT AND HOUSING
There are a number of causes that give rise to misalignment of the crankshaft and cylinder-block housings, such as improper machining, bent crankshaft, distorted cylinder block, etc. These defects result in localized wear, which tends to be greatest on some of the main bearings and less pronounced on others.
Recommendation: ensure that cylinder-block and crankshaft machining tolerances are in accordance with the engine manufacturer’s specifications. 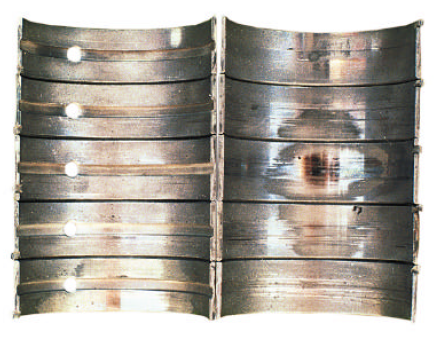 4 -- IMPROPER MACHINING OF COMPONENTS.
INSUFFICIENT CRUSH
Total contact between the bearing back and housing is fundamental to ensure good heat transfer and a correct seating of the part. If crush is insufficient, the bearing will move back and forth within the housing and shiny areas will be visible on the bearing back due to friction with the housing. On other occasions, discolorations or stains may appear, evidence of burnt oil that has worked its way into the space between the two surfaces.
Recommendation: ensure that the size of the housing bore and torquing are in accordance with the manufacturer’s recommendations. 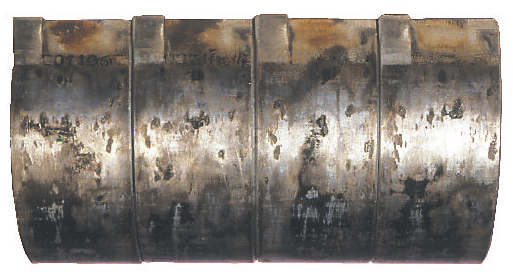 5 -- OVERLOADING
Where operating conditions cause excessive load to be exerted upon the bearings, this leads to damage due to metal fatigue
Recommendation: check that the assembly clearances and bearing material are as specified for the application in question. Similarly, ensure that engine-tuning conditions are respected. 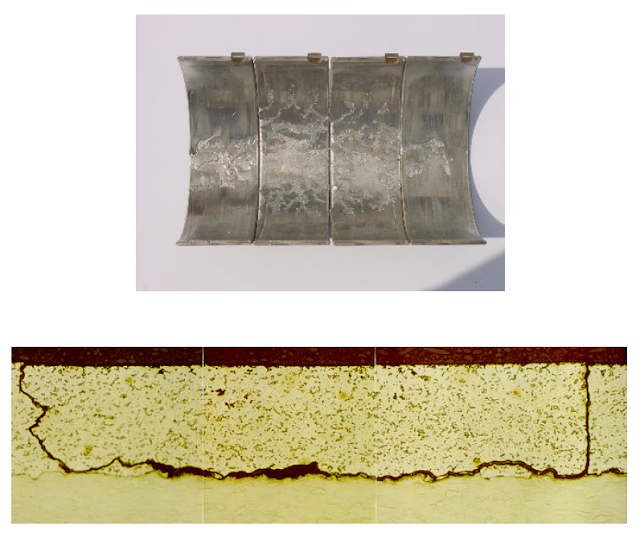 6 – CORROSION
Oil in poor condition can damage the bearing surface. This effect is due to dilution of the lead in the alloy by certain of the compounds produced by oil degradation.
Recommendation: always use the oil recommended by the manufacturer, and perform the scheduled oil changes as indicated in the vehicle maintenance manual. 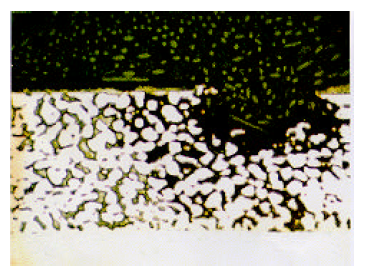 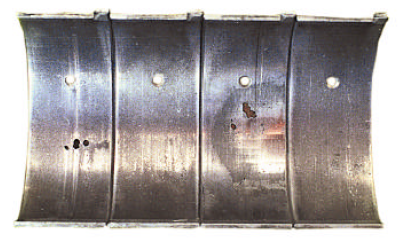 7 -- CAVITATION
Under certain operating conditions, oil pressure drops locally, producing vapour bubbles that cause damage to the bearing surface. This damage will be evident in certain bearing areas, such as oil grooves or holes, that are affected by discontinuities in the oil flow.
Recommendation: check that lubrication conditions, such as oil pressure, flow rate and type, are as stipulated by the vehicle manufacturer. 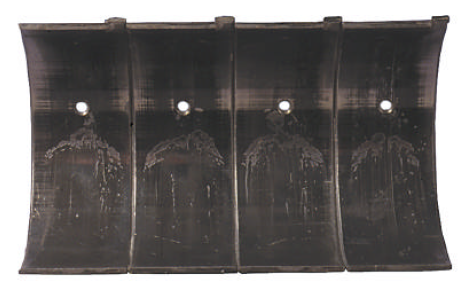